UMBERTINA, a novel,Seaview 1979; Feminist Press,1999; AvaglianoEditore,2001
Spanning four generations in a family from the Italian immigrant Umbertina to her namesake great-granddaughter, the contemporary Tina, this epic narrative spans the history of the Italian American experience from late 19th Century immigration to the present day. From Calabria to the tenement slums of New York City, Umbertina holds to her dream to change the family destiny. After the first years of struggle, she and her husband relocate the family to upstate New York where it is Umbertina's determination and native intelligence that propels them to middle class success and security. Successive generations live out the destiny that their forebear set in motion, resolving the tensions between their dual identities and their yearnings for both independence and security, family and career.
Italian edition, 2001, Recipient of Premio Acerbi, 2008


THE DREAM BOOK: AN ANTHOLOGY OF WRITINGS BY ITALIAN AMERICAN WOMEN Schocken 1985, Syracuse UP,2000
With a much acclaimed introductory essay revealing the past barriers to Italian American women writers within their own tradition as well as in the world of publishing, this collection explodes the silence by presenting fifty-six writers from the earliest to the present in all writing genres with excerpts from their work. Recipient of an American Book Award.

LOVE IN THE MIDDLE AGES, a novel, Morrow 1986; an Authors Guild Backinprint.com edition 2000
A warm story chronicling the affair between two mature singles that acts as a catlyst to propel both into exploring new options for their lives, this is an engaging, contemporary novel of expectations told with wit and tenderness while thoughtfully tackling the pain involved when loving together and living together turn out to be irreconcilable. NOW AVAILABLE AS AN EBOOK FROM THE AUTHORS GUILD.

FESTA: RECIPES AND RECOLLECTIONS OF ITALIAN HOLIDAYS, Harcourt Brace, 1988, Univ.of Wisconsin Press, 2002
Festa, the Italian word for feast and holiday, perfectly describes this book which highlights the special relationship between food and celebration. Along with holiday menus and recipes, FESTA is a memoir of the author's life in Italy where traditions played such an important role in the feast days observed. The reader is taken through a calendar year of holidays, with each month's special traditional recipes and the background of each holiday.

ALDUS AND HIS DREAM BOOK,Italica Press, 1991
This work traces the career and times of Aldo Manuzio (1450-1516), the pre-eminent printer-scholar of the Italian Renaissance known and honored throughout Europe as Aldus, creator of the Aldine editions. The magic of the age in which the book as we know it was invented is conveyed and the pre-eminence of the book printing industry in Venice is examined in its historical and cultural context. Special emphasis is given to what is considered the most beautiful printed book of all time, the Hypnerotomachia Poliphili ("The Strife of Love in a Dream"), and all the illustrations of this masterpiece are reproduced.

CHIAROSCURO: ESSAYS OF IDENTITY, University of Wisconsin Press, 1999
Spanning a quarter century of work, these essays explore the author's personal search: "I set out as a young woman enamored of literature to find my personal way through writing, to explore the role Italy brought to my sense of identity, and finally to put it all in the context of my American self...I have found my journey to be a connecting one." This collection is listed in Houghton Mifflin's Best American Essays of the Century under "Notable Twentieth-Century American Literary Nonfiction."
Italian edition, 2004

MORE ITALIAN HOURS,& OTHER STORIES,Bordighera,2001
Taking its title from Henry James' travel pieces "Italian Hours," Barolini's collection is a gathering of fifteen cross-cultural stories about Italians and Italian Americans shakily balancing on the delicate wire connecting their two worlds. Both Italy and the United States are backdrops for these elegant stories, making a variegated tapestry of people and places.


ROME BURNING:POEMS, Birch Brook Press 2004
This collection of elegant, quietly powerful poetry evokes Barolini's past life in Rome and its rich, classical traditions, evident not only here but also in the whole body of her work as novelist and interpreter of her dual background.

A CIRCULAR JOURNEY, Fordham University Press 2006
"In this beautiful collection of essays, Helen Barolini weaves a powerful tale of the illusive nature of memory, the struggle for identity, and the yearning for balance and belonging in our lives...."
Maria Laurino, author of Were You Always Italian?

THEIR OTHER SIDE: SIX AMERICAN WOMEN AND THE LURE OF ITALY, Fordham University Press 2006
"Anyone who has felt Italy's special magnetism will treasure Barolini's portraits of six American women whose lives it changed. In telling their stories, she includes her own experiences working and living in Italy..." Betty Boyd Caroli, author of The Roosevelt Women

CROSSING THE ALPS,
Bordighera Press 2010
"In this seminal early work, Helen Barolini tells the story of Frances Molletone grappling with her ethnic heritage as she falls in love with a married man. The author takes us to post- WW2 Italy, a little-documented era of turmoil, and we discover the culture of the Italian diaspora, as well as Italy before it was "discovered". When it first appeared, this novel was highly acclaimed in Italy. Now, it once again speaks to us of romantic love and conflicted longing in the aftermath of war." Christine Lehner, author of Absent a Miracle and What to Wear to See the Pope.

To order these books by Helen Barolini click on one of the following links:

Or ask at your local bookstore.

Helen at a conference in Naples on Italian American authors. 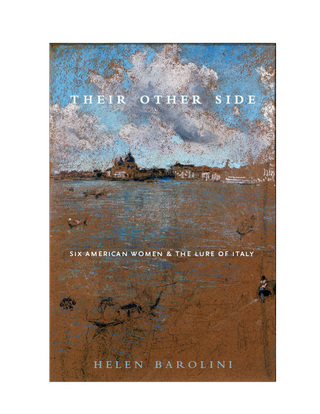 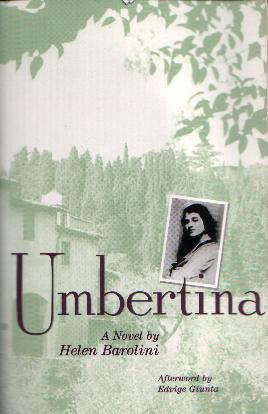